Returning from his 1906 Mt. McKinley expedition a hero, Dr. Cook lectured about his achievement as opportunities arose, but reluctantly returned to his medical practice. “After my Alaskan expeditions, the routine of my Brooklyn office work seemed like the confinement of prison…I convinced myself that in some way the attainment of one of the Poles – the effort on which I had spent sixteen years – would become possible.”13

Dr. Cook’s savior came in the form of John Bradley, a wealthy casino owner. He was a big game hunter and wanted to go to Greenland for a hunt. Together they planned an expedition to Greenland, where Cook could continue his study of the Eskimos. With John Bradley’s financial backing, Dr. Cook purchased a fishing schooner and renamed it John R. Bradley, in honor of his wealthy sponsor.

In July, 1907, Dr. Cook, John Bradley, and a crew of 11 others departed for Greenland. They spent several weeks in various Greenland locales. Bradley spent his time hunting, while Dr. Cook studied the various native peoples at each village. On August 24th, they started for Annoatok, the “northernmost settlement of the globe, a place beyond which even the hardy Eskimos attempt nothing but brief hunting excursions, and where curiously, money is useless because it has no value.” 14 It was at Annoatok that Cook decided definitively to make the dash to the Pole, and informed John Bradley of his decision. (This particular point is open to debate, as some believe that Cook had planned all along to make an attempt on the Pole, with Bradley’s knowledge at the outset of their trip.) By this time, it was late in the season, and the Bradley needed to return to civilization or risk being frozen in for the winter. John Bradley did not accompany Cook, but wished him well, and offered him supplies from the ship, which Cook used not only for his own sustenance, but for trading with the local population. 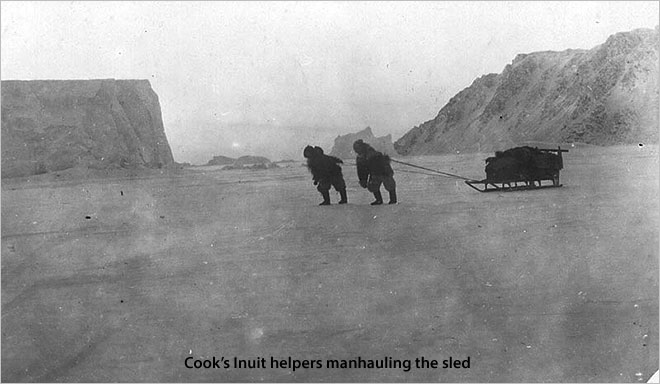 Capitalizing on the willingness of the Eskimos to help, Cook enlisted them in transferring needed camp supplies from the Bradley to shore. Dr. Cook determined that only one white man from the crew, Rudolph Franke, would accompany him at this point, and sent all others back on the Bradley. His logic was sound, for he knew that “no group of white men could possibly match the Eskimos in their native element.” 15 The Bradley departed on the morning of September 3, 1907, leaving Dr. Cook , Franke and the remaining Eskimos 700 miles from the Pole. They spent the next several months in preparation for the eventual march to the pole. Finally, “on February 19, 1908, 103 dogs were harnessed and hitched to 11 sleds… The average load was 550 pounds, mostly dried meat, fat and skin to serve as food for men and dogs.” 16 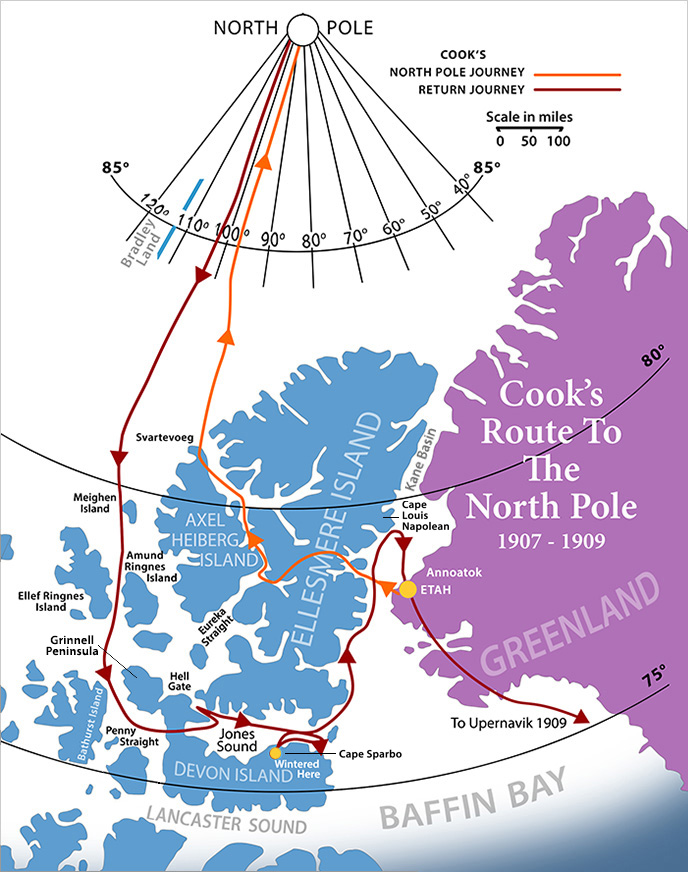 Nine of the sleds were driven by Eskimos, with Cook and Franke driving the other two. Several days later, on February 23, Cook sent Franke and some of the Eskimos back to guard the camp (much to Franke’s great disappointment), while he pushed onward with the best dogs and sledges – 50 dogs hitched to three sledges. 17 Travelling in long marches of 2-3 days, stopping to hunt and eat, they covered several hundred miles, arriving at Heiberg Island in the middle of March. The Pole was now 520 miles away. Proceeding on the theory that less is more, Dr. Cook again decided to reduce the number of crew and dogs. Now, only two men and 26 dogs would accompany him, with the lightest possible equipment. 18  Eskimos Ahwelah and Etukishook were chosen, and the group set off on March 18, 1908.

Averaging about 16 miles per day, Dr. Cook and his Eskimo companions reached the North Pole on April, 21, 1908. After arriving, Dr. Cook and his Eskimo companions remained there for two days taking observations. Unfortunately, their return to civilization was delayed by drifting ice, and consequently Cook recognized that he would not be able to make it to Greenland before the winter night set in. He and his Eskimo companions were forced to spend the winter night in a cave on the north coast of Devon Island at Cape Sparbo. Finally, in February 1909, the sun finally returned and the group set off Annoatok, arriving on April 15 after a grueling couple of months. Returning to his camp at Annoatok, he found Henry Whitney, one of Peary’s men. To cut down on the amount of supplies he would need to man-haul, Cook decided to leave a number of items with Whitney, including some equipment, clothing and papers. Whitney promised to return these items to civilization. Meanwhile, Cook set off for Upernavik, some 300 miles south, and from there boarded the Hans Egede for Copenhagen.

On September 1, Cook made his announcement of the Pole by telegram, from the Shetland Islands, Scotland. Hence, his arrival in Copenhagen was eagerly anticipated and he was again hailed a hero. Several dinners were held in his honor. It was at one of these dinners that he had learned that Robert Peary too had claimed the Pole – on April 6, 1909, nearly a full year after Cook claimed to have done so.

14 Cook, Frederick Albert. To the Top of the Continent; discovery, exploration and adventure in sub-arctic Alaska. The first ascent of Mt. McKinley, 1903-1906, page 29