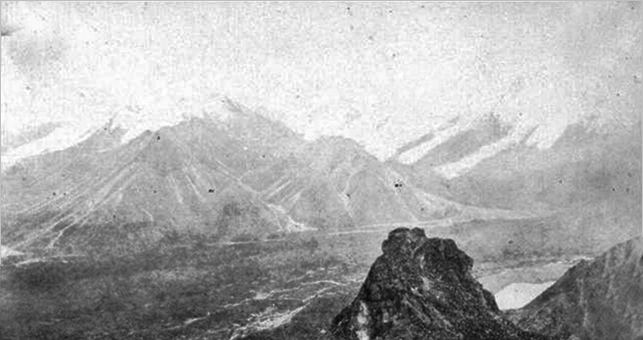 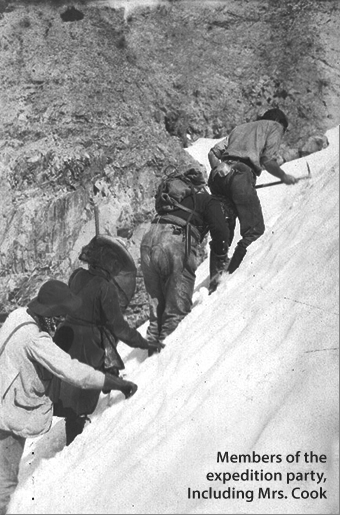 On June 9, 1903, the expedition departed Seattle on board the steamer Santa Ana. On June 25th, the crew began the overland journey to Mt. McKinley. * “We had now come five thousand miles only to find that the enormous task of getting to the base of the great mountain had but just begun.” 11 Dr. Cook’s new wife had accompanied the group thus far, but decided not to continue on the overland part of the journey and decided instead to remain in Valdez. By mid-August, Cook’s team found themselves in position for an attempt up the south west ridge of Mt. McKinley. 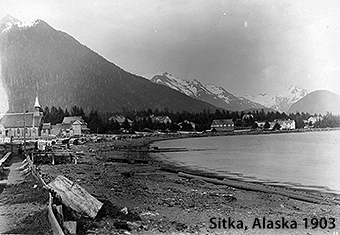 In 1902, after returning from the Erik relief expedition, Dr. Cook married Marie Fidele Hunt, a widow he had met several years before. The estate of Marie’s first husband was substantial, and the couple settled in a large home in Brooklyn. Dr. Cook had a new medical office and his practice was thriving. Though Marie had a young daughter, Ruth, she fully supported Dr. Cook’s interest in exploration, envisioning herself as a participant, much like Josephine Peary.

A report in the January 1903 issue of the National Geographic Magazine set forth a detailed plan for ascending Mt. McKinley. Located in the interior of Alaska, and well known by the native people, the mountain had only been recognized as a colossal massif in 1896. Its height had been estimated at 20,000 feet, making it the highest peak in North America. Dr. Cook envisioned that his experience in the high latitudes would be applicable in the high altitudes, and he assembled the funding and the people that would enable him to undertake this expedition. Mrs. Cook would be a significant financial contributor to the expedition.

“In fifty-four days we had marched a tortuous course of five hundred miles through swamps and forests, over glacial streams, up and down mountain sides, through a trackless country.” 12

After two failed attempts to climb to the summit of McKinley, ascending as high as 10,800 feet, the party acknowledged defeat, and descended to 8000 feet on September 1. Over the next 25 days, they continued their decent, and, four months after they had begun, the group arrived at Tyonek on September 26th.

Although they did not succeed in climbing to the summit of Mt. McKinley, they did circumnavigate it – a feat that would not be repeated again for 75 years. 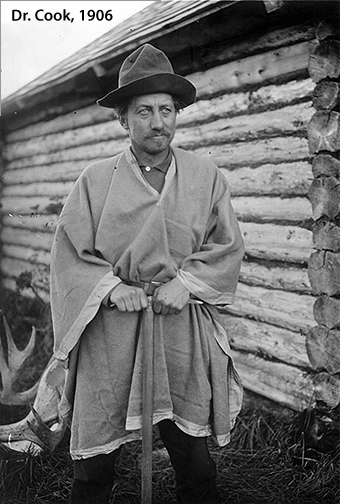 After Dr. Cook returned from his 1903 expedition to Mt. McKinley, he gave lectures about the expedition to the Arctic Club and other groups. In 1904, he gave his lecture to the Canadian Camp, a group of mountaineering enthusiasts. One of the audience members was Dr. Herschel C. Parker, a wealthy physics professor from Columbia University. Parker pledged $2000 to Dr. Cook for another attempt to climb Mt. McKinley, if Dr. Cook would include him as a member of the expedition. Dr. Cook agreed, and began outlining his plans for the next expedition. 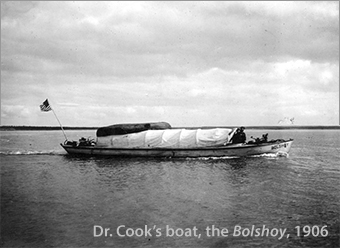 In 1905, Dr. Cook joined with Parker and 5 others to form the Explorers Club. The club attracted influential explorers and patrons, and rapidly became one of America’s most influential organizations for supporting and evaluating exploration. Cook was elected the first president of the Club in 1906.

Financial support for Dr. Cook’s next expedition came together quickly. Henry Disston, heir to the saw-manufacturing fortune, promised Dr. Cook $10,000 if Cook would agree to join him for an autumn big-game hunt after his upcoming expedition to ascend McKinley. Harper’s Monthly Magazine advanced Cook $1000 for his story. Along with Parker’s $2000, Dr. Cook had $13,000, more than enough to carry out the expedition. 13

On May 16, 1906, Dr. Cook and his expedition party departed Seattle, arriving in Tyonek on May 29. In an effort to move supplies to the base of Mt. McKinley, the expedition party used pack horses and a motorized boat, the Bolshoy. Several men traveled with the horses over land, while Dr. Cook and two of the men, Ed Barrill and John Dokkin, took the boat up river.

Dr. Cook was received as a hero by the American public upon returning from the summit of Mt. McKinley in 1906. However, his return to the continental US was delayed by a lawsuit, filed in Alaska by Bill Hughes, the owner of the horses that Cook had rented. Dr. Cook owed Hughes $600, and he refused to pay, stating that there was no real contract. Henry Disston, the wealthy hunter who had promised $10,000 to the expedition for the big game hunt, did not pay Cook the money promised, because he failed to arrive for the hunt. Dr. Cook found himself now in serious financial difficulty. Given the lateness of the season, Dr. Cook told his companions that he would not try for the summit after all – he was only looking for a route to try the next season. However, the weather cleared and Dr. Cook thought he could see a route to the summit. He decided to go ahead with an attempt up the northeastern ridge. They began their ascent on September 8. Leaving Dokkin at 6000 feet to prospect for gold, Cook and Barrill steadily made their way to the summit, achieving the peak on the morning of September 16, 1906.

Luckily, Cook’s popularity at being the first to summit Mt. McKinley made him a sympathetic figure, and several local Alaskans came to his rescue and raised  he $600 needed to pay Hughes. Finally able to leave Alaska, Dr. Cook arrived in Seattle on November 7, 1906 and on November 9, he gave his first public talk about his accomplishment to the local members of the Mazamas, a mountaineering club. His lecture was well-received, with more than 500 in attendance. However, there was doubt about Cook’s summit claim almost immediately upon his return to civilization.

Among those who questioned his accomplishment were those who had attempted to climb McKinley themselves, including members of his own expeditions, as well as residents of Alaska who had no connection to mountaineering. Though people questioned the truthfulness of his claims, they lacked the hard evidence to prove otherwise. 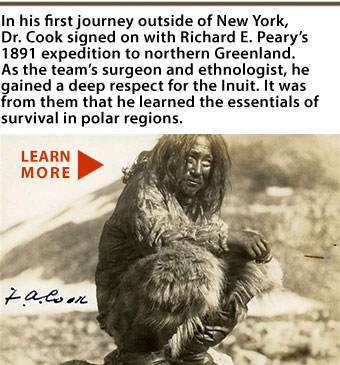 * On August 30, 2015, President Barack Obama announced that Mount McKinley was being renamed Denali, using his executive power to restore an Alaska Native name with deep cultural significance to the tallest mountain in North America.

11 Cook, Frederick Albert. To the top of the continent; discovery, exploration and adventure in sub-arctic Alaska, page 10.
12 Ibid, page 51